Headlines
Redwan Rahman graduates from FilmdomThe local government minister has instructed to cut the road if necessary to remove the waterRequest to withdraw closure shop at night till EIDThe days of the Western monolithic world are over: PutinLeaders of Germany, France, and Italy in Kyiv to express solidarity‘Presidents of two countries call and pressurized Mbappé’Two U.S. citizens are thought to be missing or taken prisoner in UkraineCOVID: The technical committee suggested lifting some restrictionsPetrol prices hit record highs in the USCanada wants a stern warning against cigarettesThe task force to protect the mountains, demanded the formation of a speedy trial tribunalDepot fire: CID tries to find the cause on CCTVRussian passports are being issued in occupied UkraineFire on Parabat Express: Railroad to Sylhet is normal after 4 hoursAnother 24 children died in Mariupol, Ukraine said
Home More Politics Why people will vote for BNP, is the question of the Prime...
Facebook
Twitter
WhatsApp
Print 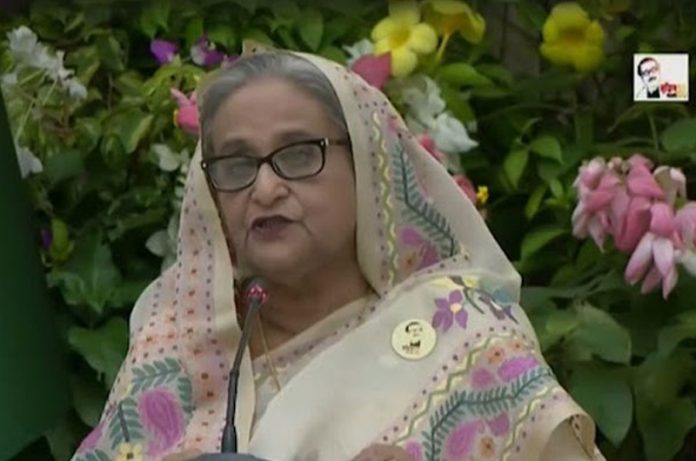 Staff Reporter: Awami League President and Prime Minister Sheikh Hasina has asked who will vote for those who are complaining that people are not able to vote.

He told a news conference on Monday that the BNP knew it had no “possibility” and was trying to “dispute” the election.

“How can a team win? Where is his leadership? An accused convicted of embezzling money from an orphan. Another was convicted of deportation as a result of various activities including the Ekushey August grenade attack, ten truck arms case. Led them.

“Then tell me in what hope the people will vote for that party.”

Sheikh Hasina said, “When do people vote. They will see who will go to power. If it happens now that one orphan is embezzling money, the other is a convicted accused, they will not be able to hold elections. ”

Prime Minister Sheikh Hasina appeared at the virtual press conference from Ganobhaban to share her experience of visiting the United States on the occasion of the UN General Assembly.

Reminding that he had asked the Awami League to prepare for the next elections at a party meeting before leaving for the United States, a journalist said that various discussions are being held in the country about the elections. What is the opinion of the Prime Minister in this regard.

In reply, Sheikh Hasina said that there was no problem in the elections held in the last few days. And even in the midst of the epidemic, voters have participated ‘very spontaneously’.

“But yes, there are questions about the election in Bangladesh. Have you thought about one thing? Many attempts have been made to question the election. Not only that, the election has not been done so that it is not fair, or so that the people do not go, starting from arson.

“Even then there was an election and there was a stable environment after the election but it is possible to do as much development as you can or can do today. Now the political parties, especially those who speak, including the BNP, actually raise the question about the election, how this party was born. ”

In his words, the BNP is not getting the ‘benefits’ that it used to have. And the BNP also ‘knows’ that they will not be able to win.

“The result is that they don’t have the faith that they can win or lose the election, they have lost it. They know they have no chance.

“It simply came to our notice then. Either way, creating a dilemma among people. Either way, to harm people. This is the attempt. In other words, the continuity of democracy is continuing. ”

After the BNP came to power in 2001, Sheikh Hasina showed the pictures of the situation created by the combination of militancy, terrorism and bomb attacks at the press conference.

He said, “Hindus, Muslims, Buddhists and Christians have not been left out of the BNP’s oppression. What happened to them as a result of all these misdeeds? Then corruption. Bangladesh is a five-time champion in corruption! As a result, the emergency is real, then we are more oppressed. I was the first to be arrested despite being in the opposition.

“Then there was the election in 2008. In that election, people voted for Awami League again, why did they vote? Because from 1996 to 2001, at least the people of Bangladesh got so much that the government means the servant of the people. And some are improving in the country. People’s destiny changes. ”

The Prime Minister asked the journalists to ask why people would vote for those who are complaining about the right to vote.

Highlighting the successes the Awami League has had since coming to power, such as power facilities, food self-sufficiency, mobile services, and building a digital Bangladesh, Sheikh Hasina said, … I mean, why did we do it, why do we do it?

“Who will vote for them, he asked first. I ask all journalists that you ask yourself, to your conscience. Who, why, for what reason, will vote for BNP or others in a dream of happiness or a glimmer of hope? That told me a little. Listen a little, let me know. ”